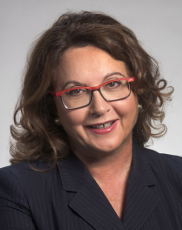 Dr Maria Albani is Director of the Laboratory of Physiology at the Medical School (AUTh) and Director of the Graduate Program of the Medical School, as well as member of the committee for the Graduate studies of the AUTh.
Maria Albani received her B.Sc. in Biology (1977) and in Medicine (1990) from the AUTh. In 1978 she had a short postgraduate training at the University of Texas at Austin, and in 1979 she was appointed as a research assistant at the Medical School of AUTH. In 1982 she joined Professor Gerta Vrbovas group in the Center for Neurosciences at University College London, where she stayed for 2 years, as a research assistant. In 1984 she was appointed research assistant at the Faculty of Biology in the University of Konstanz in Germany for 3 months. In 1985 she received her Ph.D. from the Medical School at AUTH and later in 1987 she was appointed as a lecturer in the department of Physiology and Pharmacology at the Medical School, AUTh; positions held within this department include: Assistant Professor (1991), Associate Professor (1999) and Professor (2007). During her academic life she made several collaborations and research visits to University College London, Charring Cross Hospital-Imperial College Healthcare NHS, Universita degli Studi di Siena, Universiteit Maastricht, Faculty of Medicine, University of Manitoba, at Winnipeg.
She is interested in Neurophysiology, and mainly in nerve-muscle interactions during development, reinnervation and neuroprotection. She is member of editorial board and reviewer in international journals. She has organized several national and international conferences, and chaired in several round tables. She is holding several administrative positions in the Medical School of the AUTH.