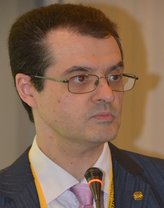 Dr. Dimitrios G. Goulis was born in Thessaloniki, Greece. He completed his basic medical training (M.D.) in the Aristotle University of Thessaloniki in 1990 and received his Ph.D. degree from the same University in 2000. Having a scholarship from the European Union, he worked for four years (1996 – 2000) as clinical research fellow at St. Mary and Hammersmith Hospitals, London, UK, acquiring the specialty of Endocrinology, Diabetes and Metabolism. During his studies in the UK, he worked with professors Desmond Johnston, Stephen Franks and Michael de Swiet in the fields of metabolism, reproductive endocrinology and metabolic complications of pregnancy, respectively. Following his return to Greece in 2000, he has been working in the field of Andrology in collaboration with professor John Papadimas. In 2004, he was appointed lecturer, in 2009 assistant professor (non-tenure), in 2013 assistant professor (tenure), in 2015 associate professor and in 2019 Professor of Reproductive Endocrinology in the First Department of Obstetrics and Gynecology, Aristotle University of Thessaloniki (head: professor Basil C. Tarlatzis).
Dr. Goulis has published more than 150 full papers in peer-review international journals and 140 in Greek journals. He was an invited speaker in more than 250 Greek and international congresses and seminars. He has been a reviewer in 30 international medical journals and associate editor of Human Reproduction, Andrology, Journal of Endocrinological Investigation, Hormones and Anir. He is currently president of the Hellenic Society of Andrology (2013 – 2017) and general secretary of the executive council of the European Academy of Andrology (2014 – 2018). Main research interests include male infertility and endocrine complications of pregnancy (gestational diabetes, thyroid disease, vitamin D deficiency in pregnancy).