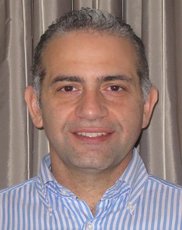 Dr Chatzisotiriou was born in Thessaloniki. He completed his basic medical training (M.D.) in the Aristotle University of Thessaloniki in 1995, receiving an award by the Hellenic State Institute of Scholarships for all academic years. His PhD thesis was performed in the Laboratory of Physiology of the Medical School in the same university, with the experimental study of the Effect of spinal cord transection on the lower motoneurons, completed and defended in 2003.
He completed his residency in neurosurgery in the neurosurgical department of AHEPA University Hospital of Thessaloniki in 2005. He was then trained in functional and stereotactic neurosurgery (treatment of epilepsy, movement disorders, pain etc.) in the Neurosurgical Department of the University Hospital of Lausanne in Switzerland from 2005-2007, initially as an Assistant and later as a Chef de Clinique Adjoint.
Since 2007, he is involved in teaching Physiology and Neurophysiology in undergraduate and postgraduate students.
In November 2009, he was elected Lecturer in the Department of Physiology of the Medical School of Aristotle University and was appointed in this position in January 2012. Recently he was elected Assistant Professor (non-tenure).
His research interests include the study of spinal cord injuries and the neuromuscular interactions following peripheral nerve injury.