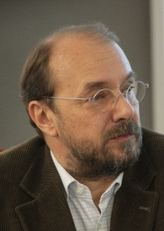 Dr Alexandros Garyfallos is a Professor in Internal Medicine and Clinical Immunology and Chairman of the 4th Department of Internal Medicine of Aristotle University of Thessaloniki (AUTh) at Hippokration General Hospital. He graduated from the Medical School of AUTh in 1981 and he got his PhD in November 1985 from the same Medical School. In March 1990 he was elected as lecturer and in July 2008 as Professor in Internal Medicine and Clinical Immunology in AUTh. From January 1994 up to November 1994 he has worked as a Research Fellow at the Rheumatology Unit of Guy’s Hospital in London.

He has supervised or acted as a member of the Examination Committees in 22 Doctoral Dissertations and in 19 Master Theses. In June of 2011 he was elected as Vice President and in July of 2013 as President of the Medical Department of AUTh.